Where is the best place to live in Spain?

Over three hundred and fifty thousand Britons live in Spanish territory and they all believe their region is the best place to live in Spain. Ask many expatriates living in Spain why they are there and their eyes roll up immediately to the sun.  But whilst climate is important it is not the only reason Britons and others move to Spain.

Lifestyle is very different and in such a large country varies enormously from region to region. For those wanting to live under the Spanish sun in the company of their own kind, then without doubt, the best place to live in Spain has to be the coastal areas. Beach resorts attract most expatriates who dream about blue skies, sand and surf.

For those wanting to experience ‘real Spain’ there is an entirely different set of requirements and the best place for them to live is inland. Not in the major cities like Barcelona or Madrid, although a very small percentage do take this route. Rather the little towns and villages with their narrow streets and whitewashed walls where nobody speaks anything other than Spanish.

Buyers opting for the latter should be aware that existence will only be possible if you make the effort to learn the language. Failure to do so will see you homeward bound very quickly. Whilst visiting a dentist and not being able to speak Spanish may be possible (owing to the fact that arghhh is pretty universal), when it comes to explaining symptoms to a doctor the need to communicate clearly and concisely is very important.

In many parts of rural Spain you can expect snow in the winter, and all the other seasons, the further North you go.  However, when you have experienced temperatures reaching up to 52C during 5 months of the summer, you will positively look forward to the winter!

On the coast the situation is very different with English almost the first language in some areas. It is by no means unusual to find people speaking five or six languages fluently. Most seaside resorts have catered well for English speaking people.  You will find menus you can read, waiters who understand you perfectly and shops/restaurants selling English food.  British and Irish bars will sell the beer you are accustomed to and provide the entertainment you like.

If you want Britain with sun there are certainly several coastal resorts that will accommodate your needs.

The best place to live in Spain

So now you know the best place to live in Spain is determined directly by what you want for your lifestyle.  Spain offers everything from quiet rural tranquillity to everything you might expect from huge bustling cities.

For more information about moving to Spain click on our Spanish Overseas Living Guide where you will find details about buying, selling and living in Spain as well as the financial options available to you.

France: One of the Best Places to Live in Europe 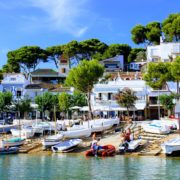 Buy a property in Spain
France: One of the Best Places to Live in Europe

Why Emigration to Australia Appeals to Many
Scroll to top